The consistency of the emotion analysis results is impressive. With its simplicity, Mataono offers a real help for training evaluation. I was able to focus on the most important parts and thus provide the best feedback.

The challenge: How can reflecting one's conviction for one's product and dealing with resistance be effectively measured to identify training needs?

In line with the motto of lifelong learning, regular training and continuing education for the workforce is carried out in almost all companies. In 2019, companies spent around € 12.4 billion on training for their employees. In view of the increasing expenditure, these training courses must of course be worthwhile and support the most important competencies.

In sales, one of the most important skills is the ability to lead a conversation: From the beginning of the conversation to the final sales negotiation, there are many starting points for a need for training. But how can these needs be objectively identified and specifically trained? In the past, a variety of methods were used for this purpose: generalized sales competency frameworks only allow a rough assessment, while trained psychologists offer a subjective perception.

Our client wanted to go one step further in a sales training program offering its employees an innovative approach that, due to its objectivity, would create more confidence in the training and thus also in their own competencies.

Together with the psychologist Dr. Oskar Handow, we conducted a new type of sales training in which the cooperation of man and machine not only led to greater acceptance among employees, but also offered added value beyond that.

The Mataono approach: What if training needs and successes would be quantifiable all at once?

On a spring-like day in April, we held a very special training session with our client's sales staff at a conference hotel in southern Germany. Each sales rep had to conduct two interviews – one interview as the basis for the analysis and a second interview to validate the success of the training. The interviews were conducted via Zoom with selected health care professionals (HCP).

The content of the discussions was a drug that was already known. HCPs who do not yet use this drug or who are critical of its use were deliberately involved in order to rehearse how to deal with objections and resistance. Psychologist Oskar Handow used the data generated by Mataono to point out highs and lows in the participants' conversational skills. This allowed training needs to be identified and addressed immediately. In their second conversation, the salespeople were able to apply the insights they had gained and test the effect.

In addition to the analysis diagrams, we generated evaluation videos that allowed a review of the conversations. This made it possible to perceive the direct influence of the interview management on the physicians' emotions.

The result: What happens when conversations can be expressed in data?

In a total of 10 conversations, Mataono was able to unfold its effect and provide objective feedback on the conduct of the conversation. In this way, salespeople were able to experience their external impact through the data-based approach. High and low points were easily identifiable. In their view, the psychologist's recommendations for action were suddenly more comprehensible. 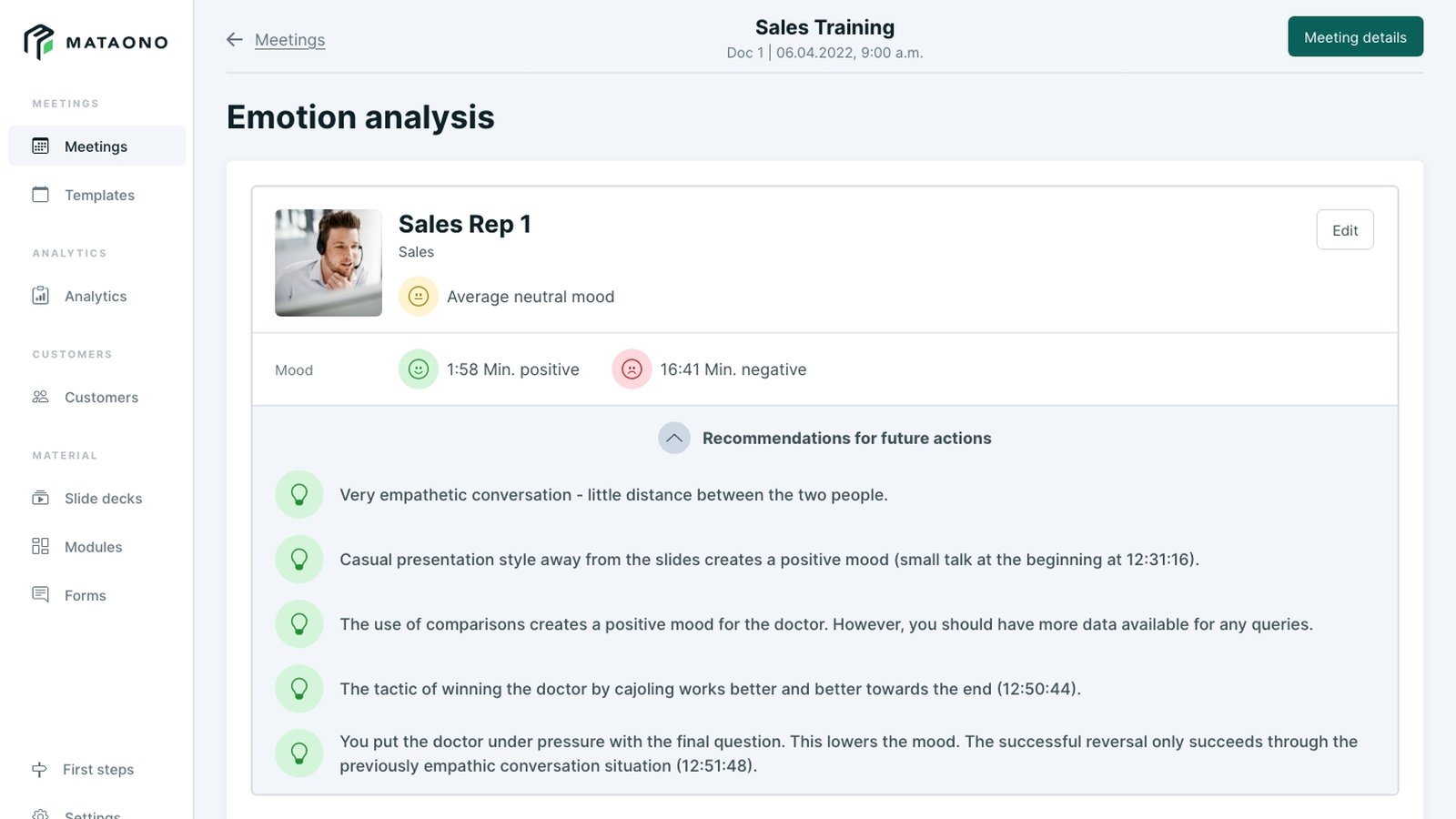 Mataono analyzed the emotions. They were converted into instructions for action by a psychologist. 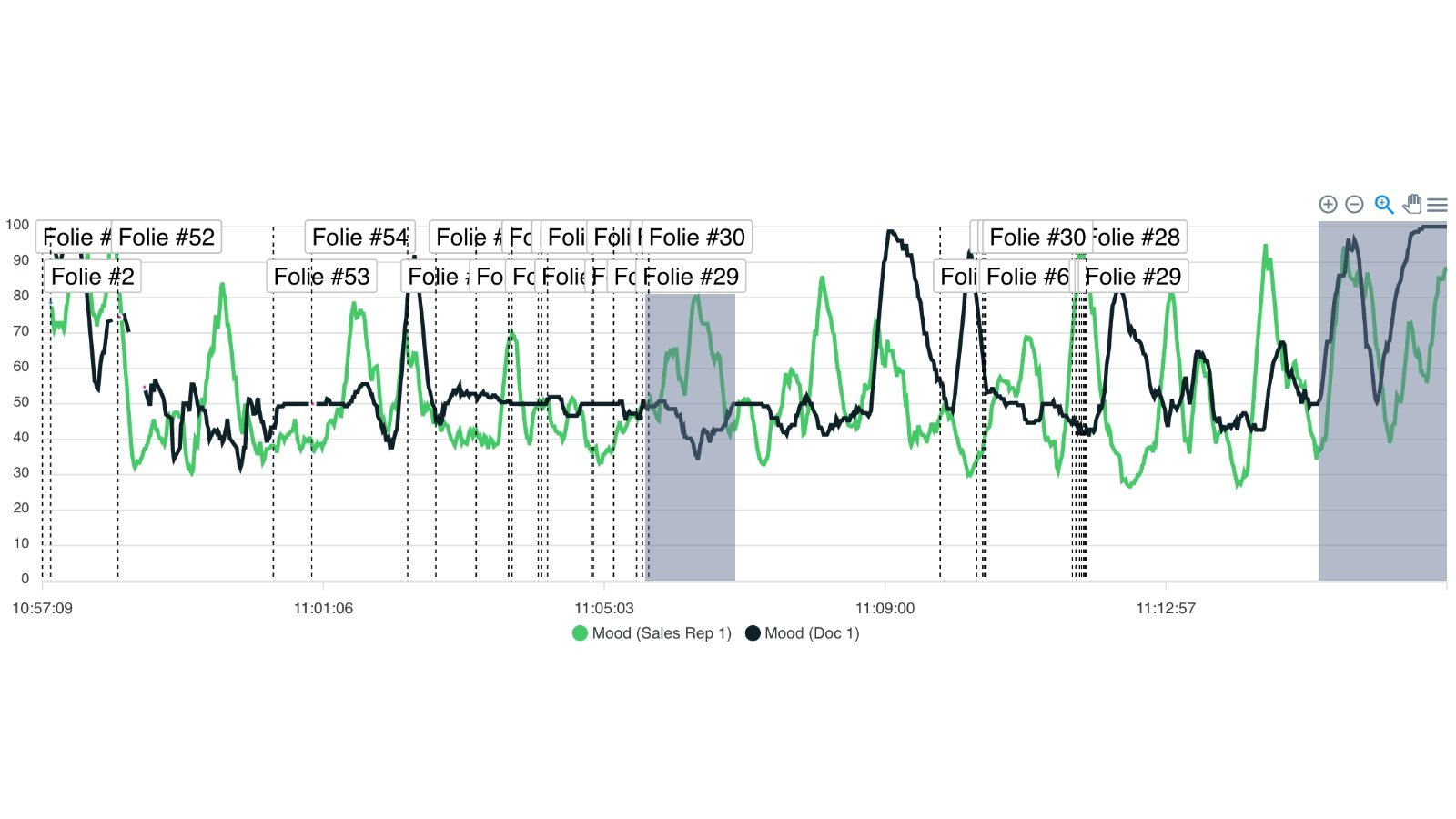 In the case of objections, emotions diverge. At the end, both participants in the conversation move in the same, positive direction. 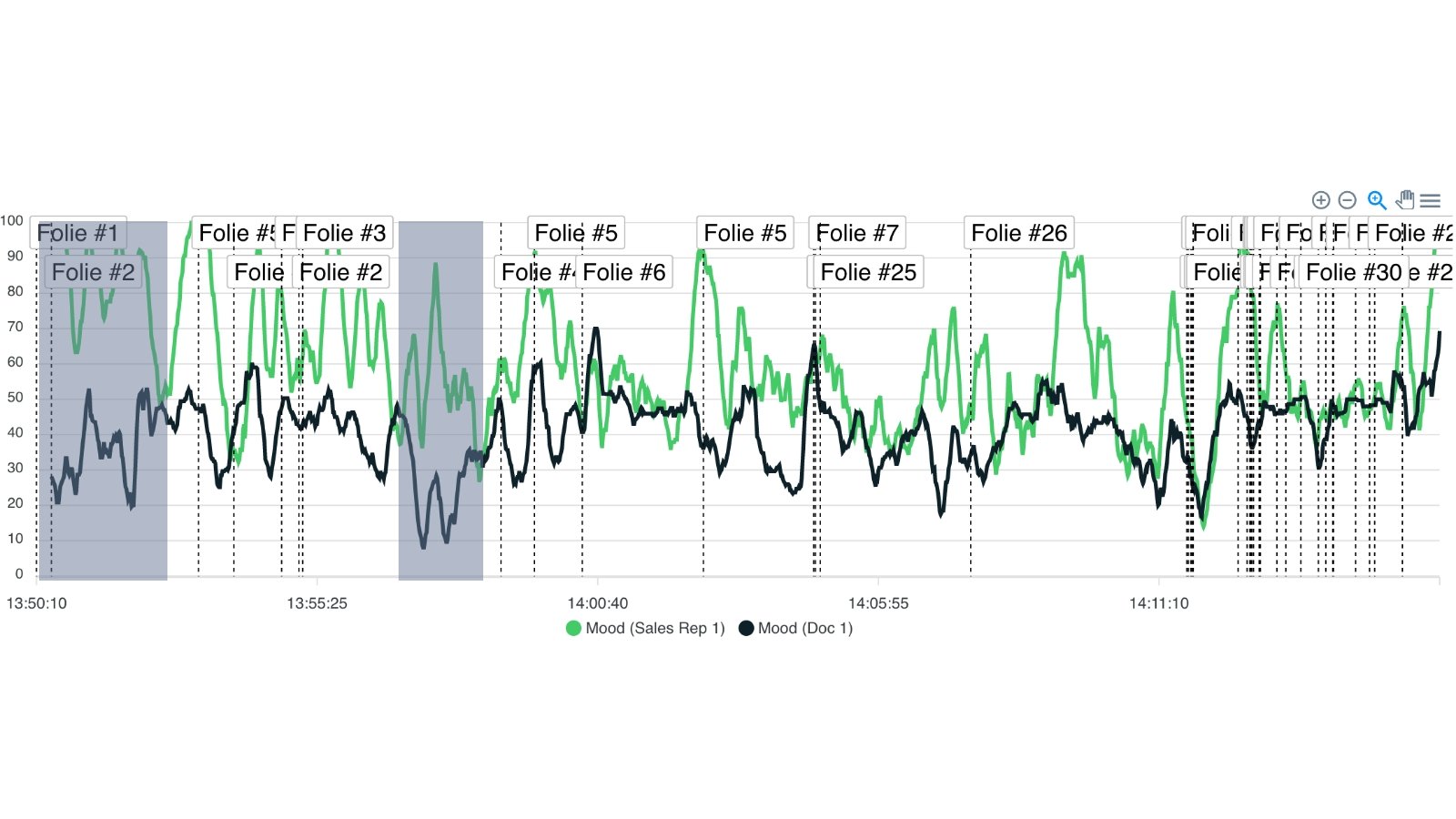 Bumpy start, with small talk not creating a good conversational atmosphere. In between, over stats provide for divergences.

Based on the data collected, the participants were able to see well whether their conversation strategies were successful. What emotions did the small talk evoke at the beginning? To what extent could statistical data be brought across convincingly in the middle? And does it help to cite successful studies at the end?

With the help of Mataono, the reactions of the HCPs could be analyzed in detail. In which moments was there empathy? Where was the emotion score the highest? This gave the sales staff a good picture of their performance. The psychologist's detailed evaluations and recommendations for action made it possible to adapt strategies. The next day, the conversations were much better.

The results of the training can, of course, be used in the future. The participants can easily track their progress during the next training with Mataono based on the data. Also, our client can track much more precisely the effectiveness of the applied trainings. 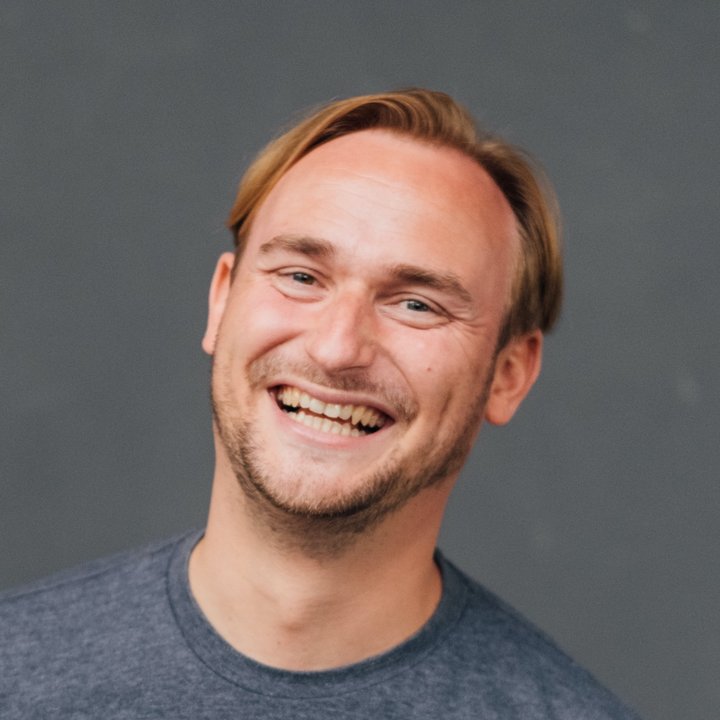 Schedule your personal 30-minute consultation and let our founder Chris explain how you can effectively use emotions in your sales training.